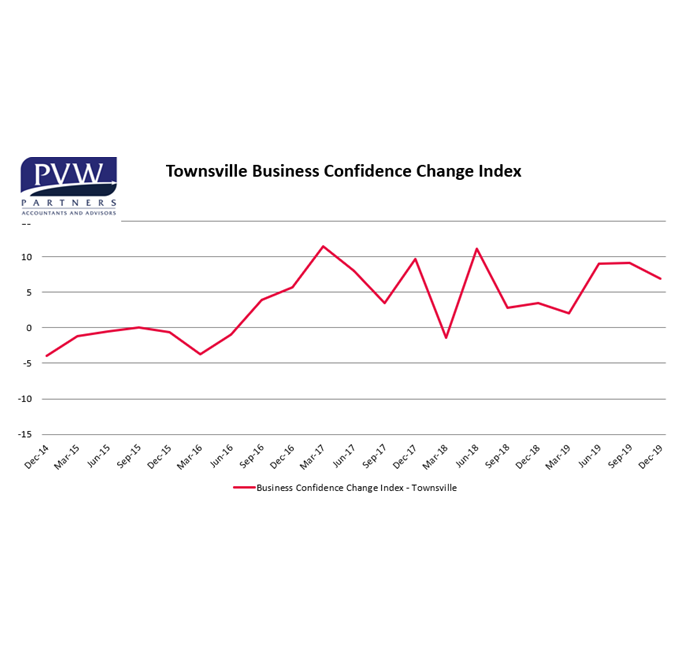 The PVW Partners Quarterly Townsville Business Confidence Index has finished the year stronger than it started, despite a minor contraction in confidence heading into the December 2019 quarter eroding some of the confidence built largely on the back of the flood recovery works earlier in 2019 and a stronger regional project pipeline.

Year on year, Townsville’s business community has reported more sustained levels of confidence in 2019 than was the case in 2018. This is particularly significant in wake of the monsoonal trough and flooding early on in 2019 and speaks to both the resilience and adaptability of our local businesses and the people who run them.

“Businesses with a turnover of less than $10 million are incredibly optimistic about the future which is great news for the Townsville economy. 73 per cent of smaller business operators indicated they expect to maintain or increase staffing numbers over the coming months, while 94 per cent of respondents in the same category believe their sales will hold steady or increase,” Mr Valentine said.

“Interestingly, bigger businesses with a turnover of more than $10 million weren’t as confident, with only 18 per cent expecting employee numbers to increase and 27 per cent indicating they expected an increase in sales. In fact, 27 per cent of the larger business respondents indicated they may see reductions in employee numbers over the course of the December 2019 quarter.

“This could be largely due to the fact that the bulk of the region’s flood recovery works are well underway, or in some instances almost complete, and we’re coming to the end of major projects such as the Townsville Stadium.

“It is going to be incredibly important to the future economic success of our region that major projects from government and the private sector continue to flow through to keep the pipeline of investment and job opportunities in North Queensland strong. We need to build on the momentum that the flood recovery works have created, albeit that momentum hasn’t been evenly spread across our economy and some businesses continue to struggle.”

On the back of Adani approvals earlier in the year, confidence continues to remain strong in mining related businesses, with around 92 per cent of respondents indicating they expect sales and employment numbers to stay constant or increase.

Local businesses were also asked how important Government disaster recovery funding or other government related assistance has been to their ongoing business operations over the past six months.

“The results were somewhat of a mixed bag, with around 40 per cent of respondents indicating they hadn’t seen an impact, while more than 36 per cent believed the assistance was in some way important, either directly or indirectly, to their business operations,” Mr Valentine said. “These results could reflect the focussed and targeted application of the disaster recovery funding arrangements with it being more difficult for the business community to assess the indirect benefits that these sources of funding bring to our economy,” Mr Valentine said.

“Overall, business confidence in Townsville has finished the year stronger than it started and we are continuing to see the distinct upwards trend in business confidence over the past couple of years when compared to the negative scores we saw between 2014-2016.”