PRODUCTIVITY COMMISSION OUT OF TOUCH WITH REGIONAL AUSTRALIANS 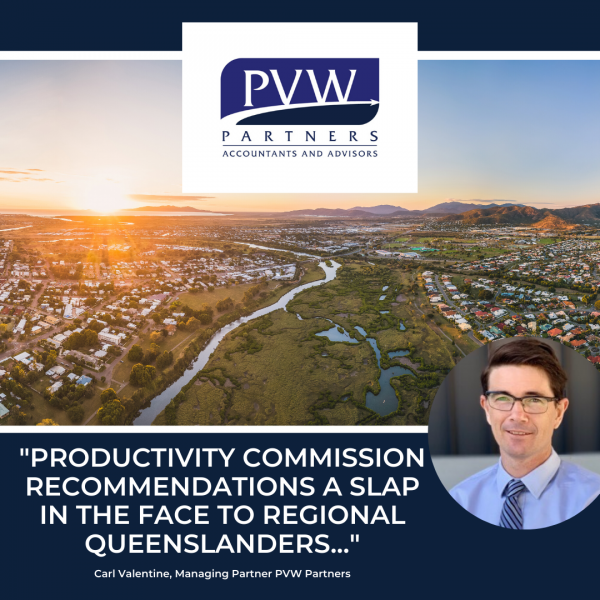 Leading North Queensland based accounting and advisory firm PVW Partners has called on the Australian Government to disregard recommendations made by the Productivity Commission which would see the Zone Tax Offset (ZTO) for regional Australians scrapped.

PVW Partners Managing Partner Carl Valentine said the recommendations made by the Productivity Commission in its final report on Remote Area Tax Concessions and Payments is a slap in the face for those living outside of metropolitan centres.

“As a firm which represents 550 client groups across regional Queensland, we are incredibly disappointed upon reading the final report to find that most of the recommendations made by PVW Partners and many other people from across regional Australia appear to have been largely ignored by the Productivity Commission,” Mr Valentine said.

“The report has missed an opportunity to initiate positive policy reforms to develop Northern Australia, grow sustainable communities and ease the pressure on our capital cities.

“In particular, the recommendation to abolish the ZTO is of serious concern. This recommendation only serves to put further financial pressure on regional residents who are, in many cases, already doing it tougher than their city counterparts.

“PVW Partners advocates that there is a very real need to reform and expand the ZTO to provide a meaningful difference which would assist our region to attract, grow and retain a thriving population.

“The Australian Government need to do better when it comes to providing meaningful tax incentives for those living in regional and remote areas of Northern Australia, not diminish incentives even further.”

With regional businesses and individuals facing challenges which their capital city counterparts don’t, including much higher insurance premiums and inflated electricity costs, PVW Partners advocates that the need for assistance is great.

The firm also has serious concerns about assumptions made by the Productivity Commission in its report around why people “choose” to live where they do.

“There are suggestions that many Australians ‘choose’ to live in regional Australia – including farmers, miners and suppliers to these industries, to name a few. Many of the types of clients that PVW Partners work with are third or fourth generation- they did not ‘choose’ where they were born or the family business established, however, their livelihood is dependent on being located in regional Australia,” Mr Valentine said.

“There appears to be an assumption that people can just pack up and move on a whim which is most certainly not the case.”

“The proposed changes to FBT involve the tightening and removal of housing, goods and services. If implemented, these changes would have a significant adverse impact on regional Australians,” Mr Valentine said.

“Finding staff to live and work in isolated areas known for their harsh conditions is difficult at the best of times – if employers  are no longer able to offer room and board, that will significantly impact the employment package they can offer and, by extension, negatively affect their ability to attract and retain quality staff.

“We strongly advocate that the Productivity Commission should in fact be looking at ways the Australian tax system can be better utilised to encourage and support more development and stronger economies in rural and regional areas of Australia.”