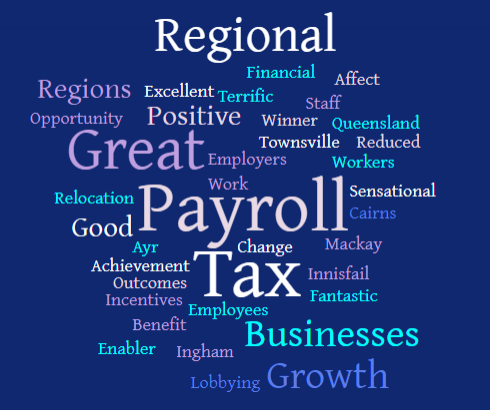 I have long felt the way about Payroll Tax reform that many North Queenslanders feel about the Cowboys. Passionate. A never say die attitude. A true believer no matter the season. These feelings also stem from being a NSW supporter – and just like the Blues, when it comes to Payroll Tax reform, its about bloody time we had a win.

While other jurisdictions across the nation have been embracing Payroll Tax reform, the silence in Queensland has been deafening. Until now.

As the Queensland Treasurer Jackie Trad handed down the Budget recently, I was extremely optimistic Payroll Tax reform would be on the agenda, particularly following the results of the May 18 Federal Election. Regional Queensland had found its voice and governments of all persuasions suddenly had no choice but to sit up and take notice.

It’s one of the reasons why PVW Partners decided to put a Payroll Tax reform submission to the Queensland Treasurer in the weeks leading up to the State Budget being handed down. If there was ever a time to strike while the iron was hot, now was it.

I’ve said it before- Payroll Tax is one of the most obnoxious taxes in existence. It sends a clear message to employers that if their business is going well and they employ enough staff to take them above the State Government imposed wages threshold, they will be punished by having to pay extra tax for each staff member they put on.

PVW Partners advises more than 550 individual and family client groups. Our clients are hard-working regional Australians whose businesses are the engine room of our economy. These people should be supported and enabled in their efforts to create more employment opportunities, not hindered by an onerous tax that serves as a blatant cash cow to government coffers.

On the 11th of June, Queensland Treasurer Jackie Trad proved she’d been listening to pro-business advocates like PVW Partners and businesses from across regional Queensland when she announced welcome, but hopefully only the first stage of, Payroll Tax reform.

In combination, these two changes should see the Payroll Tax bill of regional Queensland businesses reduced by between 15% - 20% (or, better yet, see some of them avoid payroll tax altogether where their wages bill is less than $1.3m).

When I shared the news with businesses from across regional Queensland, the response was overwhelming.

“Great advocacy and well influenced. This is an outcome that counts – in our business this will save us $24, 000 plus per year.”

That is money that can be put back into those local businesses, the local economy and the employment of new staff. The benefits are far reaching across regional Queensland.

“This is something that affects us greatly and has shackled us from taking on more work in the past.”

These changes are a positive step in the right direction. I am unashamedly proud of the role PVW Partners has played in bringing about this change. We are a regionally based voice advocating for positive change for regional business.

And we won’t give up the good fight here! We’ll continue to advocate for further reform and who knows? With a State Election just around the corner, anything is possible.

More details on the Payroll Tax Reform can be found at: https://budget.qld.gov.au/payroll-tax/